Headline-Trading and the TL;DR Generation

How Culture, Media and Technology Have Reduced Informed Conversations to the Crass Exchanging of Headlines

Can't be bothered to read? SKIP TO THE END.

Living in the epicenter of media and culture, New Yorkers have always prided themselves on being intellectually and artistically informed.

In years long behind us, men and women would wake up each morning, pore through newspapers during subway commutes and digest a detailed exploration and examination of trending topics. Later, whether over the water cooler or around the dinner table, those worldly affairs might then be dissected, debated, disputed and deliberated upon. The collection of those conversations would end up culminating into the public’s perceptions.

But those times have changed. Digital content has taken hold, with no intention of letting go. Newspapers and case studies... long form reads and detailed statistics... have been strewn aside as obsolete art forms. Technology has innovated, yet the definition of what it means to be informed – to be able to converse intellectually about current affairs – has inversely devolved.

To shed some light on the problem, let’s take a look at a typical conversation you might have these days. A conversation unfortunately all too common.

The once iconic and glorious “Winged Victory” statue now stands without a head at the Louvre in Paris, its form has decayed over the course of time. Similarly over time, as our generation continues to skim and headline-trade, we too begin to lose our heads – and thereby our perspectives.
AN “INFORMED” CONVERSATION OF THE 21ST CENTURY

Did you see the news about [generic headline 1]?

Yeah, I wasn't too shocked by that. But did you see [generic headline 2]?

Yep, I think I saw that

I read [generic headline 4] and it actually confirms the opposite; especially that [research study statistic], so I personally believe we should in fact

CONVERSATIONS HAVE BEEN SIMPLIFIED TO AN EXCHANGE OF TRENDING HEADLINES

These conversations transform into a battle of boasts. And the victor? The one perceived as the most informed? The person who’s skimmed the most headlines.

Do you have potential biases in your sources? Do you have more than just a single source? Do you even read any of your articles? Those issues bear little to no weight for the information supplied to a conversation. Digital readers all too often check in with the attitude of “Too Long; Didn’t Read” (TL;DR).

But the stakes involved are enormous. It’s our generation’s knowledge base, perceptions, influence and judgment. These conversations guide the actions we make in our own lives and, effectively, the society surrounding them.

The roots and hurdles to overcome with this problem are just as large. If we are to fix them, it will require rethinking how we approach technology, media, culture... and, most terrifyingly, ourselves.

So with that said... what are we waiting for? Let’s dive in.

The statue of Nike, Goddess of Victory, has a piece that’s often overlooked in the Louvre. Its right hand – a part that’s misshapen and broken. Our generation’s unawareness is that same fractured puzzle piece that prevents the completion of an the idealized statute or – in our case – community.
WE NEED TO STOP UNDERVALUING IT
1

Rent, relatives, relationships, rush hour ... there are so many other things worth prioritizing. One might ask, “I already appear informed and knowledgeable just from skimming headlines, so why bother sacrificing any more time for it?”

We must think grander than ourselves. Just as a single vote might not make a difference, once that disillusionment with voting spreads throughout the masses, government fails. Similarly, if you ignore being more informed, it might not have an immediate and direct effect on your life. But when you multiply it amongst the rest of our generation, the problem becomes prolific.

This societal lack of interest in and value of how important it is to be a well-informed public is already having noticeable consequences. A more informed public can elect stronger political leaders, prioritize breaking news, elevate cultural standards and hold the media more accountable.

And those issues, my friend, do end up affecting you.

WE NEED TO DEVOTE MORE TIME
2

Our culture emphasizes and pushes for a fast-paced, busy lifestyle. So for the sake of saving time, we sacrifice being properly informed – instead replacing it with knowing the bare minimum.

NPR recently pulled an April Fool’s prank that toyed with people not reading beyond the headline. They posted an article titled “Why Doesn't America Read Anymore?” with the copy inside instructing readers not to comment or share the piece. Unfortunately, it only highlighted the thousands of users not opening or reading articles past their headlines.

Chartbeat found that there was a shockingly zero correlation between digital content that was shared and how often it was actually read. All too often we take the quick route of reposting or sharing content without seeing if it’s an unbiased, well-researched, informed piece of content... or, you know... good.

You might want to read a piece before you send it... you never know what might be inside.

Hopefully not an April Fool’s prank.

WE NEED TO TAKE ON THIS CHALLENGE
3

But let’s not kid ourselves. It’s insanely difficult to be well informed with everything going on in news, politics and culture each day. Not to mention, these subjects have remarkable depth to them and complex subject matter.

It requires a lot of mental effort and strain to be horizontally and vertically informed in them all. Magnificent memory. Incredible intellect. All required to properly digest and properly converse about public affairs.

But hey... listen... you don’t need to be the next Einstein to talk politics.

However, we can do a lot better than skimming a few headlines. There has to be some balance between those two extremes – some form of improvement to facilitate a more well-informed generation.

WE DEMAND CHANGE FROM THE MEDIA
4

Printed newspapers aren’t the only thing that’s shifted in the media. Competition, a surge for ratings and financial pressures have heavily influenced how our media sources prioritize newsworthy items and supply trends to the public.

These changes didn’t happen immediately. It was a gradual shift in society as technology and culture expedited. People began to expect near-immediate publication of news and events.

CNN was one of numerous outlets born to feed this constant hunger. Out of a need to meet this demand, it became pressured to over-report on issues that might not deserve as much airtime.

When the focus becomes the headline, the article ends up being the piece neglected. Thin with investigative content, journalism and depth, writers often just repeat columns from other articles.

The BBC experimented with distributing short news items through a project known as “Instafax.” It similarly shared news and videos via Instagram to capture that person on the go.

Other platforms like “TheSkimm” emerged recently to deliver the news via an email newsletter service. By focusing on short, simple and easy-to-read news bites, they grew to a readership of 3.5 million subscribers.

Each media outlet is marching to out-innovate their competitors on the best headline strategy. The content increasingly bears less and less substance.

Maybe instead, our media needs to take a step back. It’s easy to understand why a media company would need to prioritize earnings and its financial future. But if all of our media outlets focus on the clicks and numbers... what will happen to journalism?

WE HAVE TO STEER TOWARDS READING, NOT SKIMMING
5

Our online world has innovated faster than we’ve been able to properly regulate or grow accustomed to. Over the course of the last decade, the Internet radically changed with the rise of social media, clickbait, Web 3.0 and other digital revolutions. The very way we digest media shifted... perhaps before we could properly prepare for it.

The acronym TL;DR used to be a humorous form of slang. It was used to call out writers on unnecessarily long posts.

Now? It’s the writers who are using the acronym. Over time, as online writers lost confidence in readers giving their articles a proper read, they resorted to using the acronym themselves. The thought being, “Hey, I at least want to get my primary point across...”

It’s not all our fault. The digital world is inherently built to be skimmed instead of read. It’s the Internet’s natural order.

But the further technology heads down this path of skimming over reading, the further we’ll follow the path of being ill-informed.

“Users of websites have different expectations than users of print. They expect to feel “productive,” not contemplative. They expect to be in search mode, not processing mode.” Ellen Lupton, “Thinking with Type”

The cultural and technological roots that make up this problem are no doubt enormous. It will not be a simple or quick fix. But, hey, the first step is to admit we have a problem.

Is it possible to be 100% informed on everything? Of course not. Not even close. But can we do more than read a 60-character headline? I’d like to think so. The solution is within you. Within each of us.

While the inherent problems are too large for any one of us, we as a collective whole can make a difference. The fact that you made it all the way to the end of the article is at least a first step.

TL;DR
WE ARE ALL DOOMED
Share This Article
The We Issue • F/W 2016
Prev Next
In Bloom
By Jacob Burstein
Year of the #BlackGirl
By Sianna Stewart
Photo Credits
Share 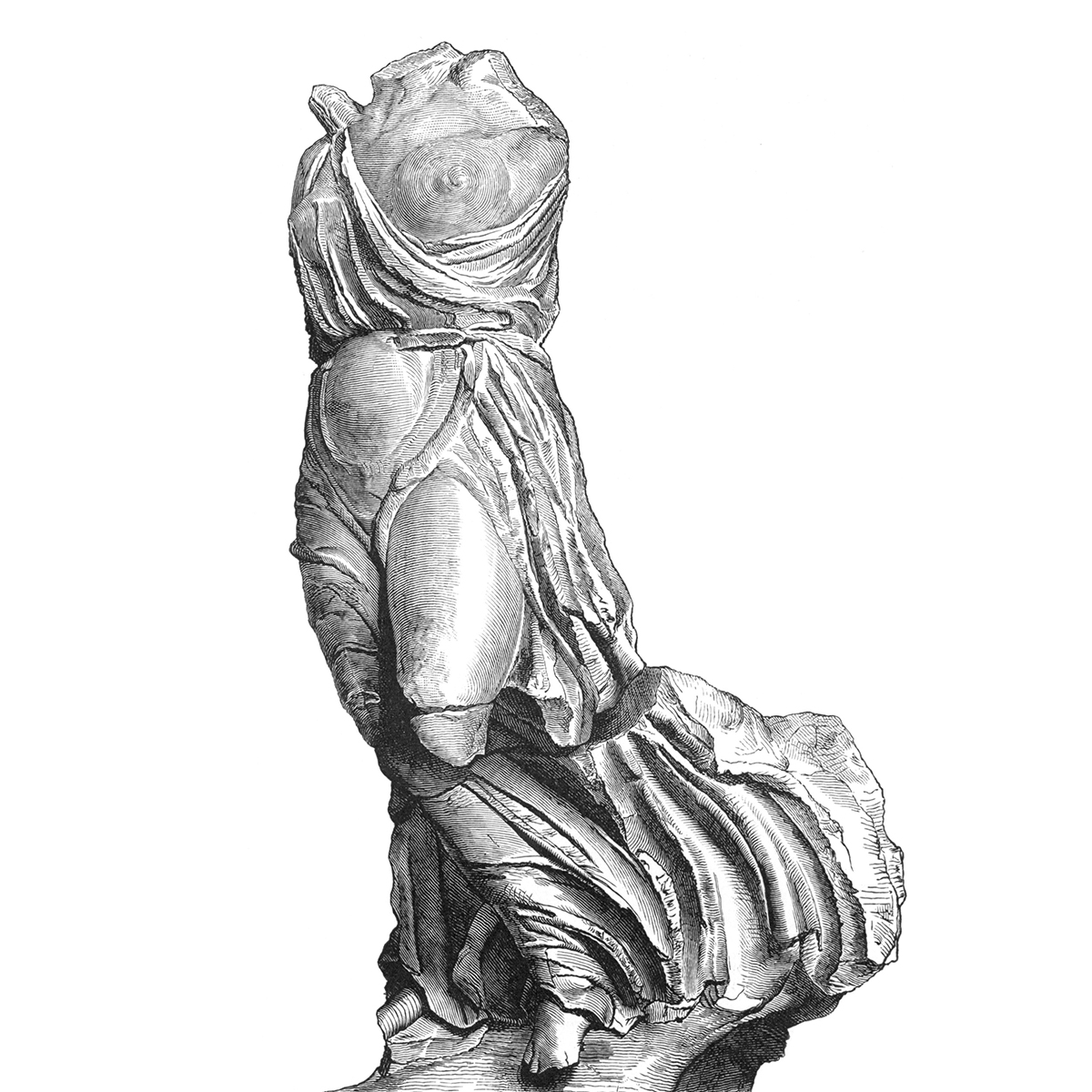